There’s A World War Going On For Bread Says Italy 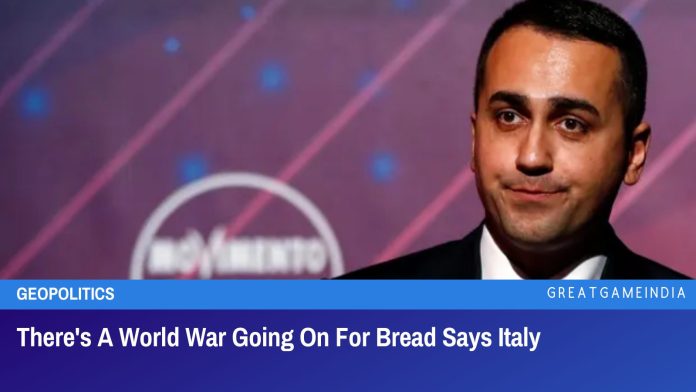 Ukraine generates 15% of worldwide corn exports, half of global sunflower oil exports, and roughly 10% of global wheat exports, rendering it a key link in the global food chain. Considering the situation, there was no exaggeration when Italy said that there’s a world war going on for bread.

DID YOU KNOW: Biden Creates DARPA For Health – ARPA-H

During a press conference on Saturday, Italian Foreign Minister Luigi di Maio warned that if the military crisis in Ukraine does not stop shortly, the resultant famine could cause political instability in Africa. He also claimed that “terrorist organizations and coups d’etat” could be on the cards.

“The World War for Bread is already underway and we must stop it,” he said.

Di Maio encouraged Russian President Vladimir Putin to “come to the table” as quickly as possible to establish a peace pact, which should include a specific agreement on wheat.

“We must not forget that there are 30 million tons of grain blocked in Ukrainian ports by Russian warships. What we are doing is working to ensure that Russia unblocks the export of grain in Ukrainian ports, because at this moment we risk new wars breaking out in Africa.”

Mario Draghi, the Italian prime minister, has already requested that Putin authorize grain shipments from both Russia and the portions of Ukraine that are under Russian authority. On Friday, he told Russian television that shipments could go through Belarus.

“If someone wants to solve the problem of exporting Ukrainian grain – please, the easiest way is through Belarus. No one is stopping it,” Putin explained. “But for this you have to lift sanctions from Belarus.”

He also disputed that Russian warships are preventing Ukraine from exporting wheat. Putin claimed that Kiev had heavily mined its own harbors, posing a major threat to ships attempting to enter Ukrainian ports.

Meanwhile, Kiev has been exporting grain to Europe via the Romanian port of Constanta and over land — a considerably less economical method because far less can be moved at once. Smaller volumes are inclined to make their way to northern Africa now that European countries can pay more for the crop, and African officials have appealed with Europe to relax sanctions on Russia that make it more difficult for them to buy food through the SWIFT system.

Di Maio has urged Putin to sign a cease-fire deal that would permit Italy to evacuate civilians in eastern Ukraine, though it is unclear whether this would be in addition to the existing humanitarian corridors established by Russia and the Donetsk People’s Republic.

Ukraine generates 15% of worldwide corn exports, half of global sunflower oil exports, and roughly 10% of global wheat exports, rendering it a key link in the global food chain.GreatGameIndia is being actively targeted by powerful forces who do not wish us to survive. Your contribution, however small help us keep afloat. We accept voluntary payment for the content available for free on this website via UPI, PayPal and Bitcoin.