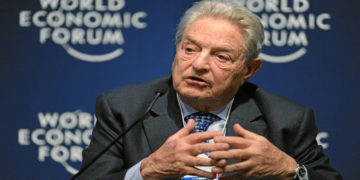 A group of Hispanic investors with backing from leftist billionaire George Soros have purchased 18 radio stations across 10 cities. The deal was worth roughly $60 million.

Acquired stations will now form the Latino Media Network (LMN) and will be led by Valencia. LMN stated it has secured financing from “leading Latino investors” as well as Lakestar Finance, an investment group associated with George Soros.

DHS Warns of ‘Heightened Threat Environment’ Ahead of Midterm Elections

Now, after securing more than $80 million in funding, the project is set to launch.

“We believe in the power and reach of radio and it remains a main source of media for a significant number of our community,” Rocketto told NBC News. “We hope to create relevant content for radio and other audio platforms with content that our community can trust and rely on.”

One of the stations included in the deal is Radio Mambi, a conservative talk radio station in Miami, Florida, that Democrats have long accused of spreading “misinformation” among Hispanic communities, according to The Washington Examiner. Radio Mambi has long been known as a staunch anti-communist network, particularly among Cuban exiles.

The sales must still meet Federal Communications Commission (FCC) approval before LMN can fully operate the stations. That process could last well into 2023, Florida’s WLRN reported.