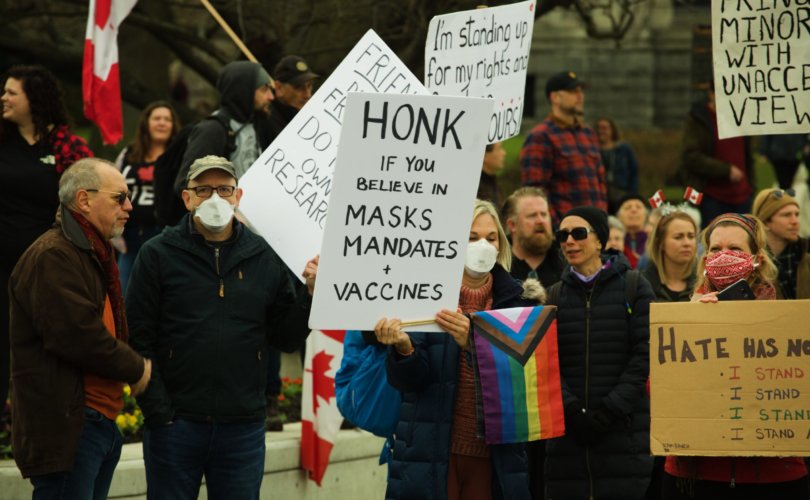 You’re invited! Join LifeSite in celebrating 25 years of pro-life and pro-family reporting at our anniversary Gala August 17th in Naples, Florida. Tickets and sponsorships can be purchased by clicking here.

BATH, England (LifeSiteNews) — A communications expert on Saturday discussed why people aren’t “listening to [the] facts and logic” of COVID, and explained how to get such people to open up to the truth.

David Charalambous, founder of “Reaching People,” an organization that teaches effective communication, believes COVID is being used as part of a “divide and conquer” agenda. During the international health conference “Reclaiming Science Together,” held May 20-22 in Bath, he sketched how such division plays out, and how to actually get through to people with opposing views.

As an example of the divisive mentality at work during COVID as well as how to break through it, he told the true story of a psychologist named Rachel who visited a local park with her colleagues during the first COVID lockdown to try and see if anyone was in need of help, or just needed to talk.

Rachel and her associates encountered an elderly lady sitting on a bench, who proceeded to yell at them, “Super-spreaders! Murderers!” Charalambous recounted that while Rachel’s instinctive reaction was anger, she calmed herself to ask the elderly woman, “How can I help you, my dear?”

The woman eventually softened a bit, and said, “I don’t want to get emotional.” Rachel assured her that she could let her guard down, since she was a trained psychologist. The woman replied, ‘I just need a hug.”

Charalambous pointed out that both those who accept the COVID narrative and those who challenge it are vulnerable to the temptation to direct anger onto those with different COVID perspectives. He believes this is in part because people tend to overemphasize the role of personality, and underestimate situational factors that influence others’ views.

He noted that typically, when someone presents a point they are “absolutely sure” is fact to someone of an opposing viewpoint, the idea just “bounces back” — that is, the other person is entirely closed off to the idea.

Charalambous made the startling claim, in fact, that simply presenting facts to people of opposing viewpoints actually helps “cement” their preexisting beliefs rather than move them closer to the new viewpoint being presented.

While Charalambous said there are as many as 25 reasons this phenomenon happens, one of the simplest explanations boils down to cognitive dissonance: When another idea doesn’t match one’s own pre-existing understanding, it is easier to dismiss the idea than re-examine one’s own beliefs.

Where COVID is concerned, what makes getting through to people even more difficult, he pointed out, is that in addition to the “24/7 propaganda,” the “compliance” route — that is, following all COVID regulations and getting the COVID jabs — is “painted with Teflon,” a smooth and easy path. Whereas the route of resistance is “painted with sludge,” and made “as difficult as possible … to the point” where one is basically called a tin-foil hat “conspiracy theorist.”

Charalambous remarked that we should not be surprised at such high rates of acceptance of, and compliance with, the prevailing COVID narrative. He pointed out that the tendency to submit to authority figures was amply demonstrated by the famous Milgram experiments, which found that 65 percent of people “would literally press a button to harm another person” with “potentially deadly” force, “simply because an authority told them to.”

“If people are stressed, if people are scared, they will come away from their natural tendencies,” he argued.

Charalambous outlined a strategy that he said can be used to dramatically increase the chances we get through to people who think differently about COVID.

The three main tools to achieve this are “Stories, metaphors, and questions,” he said, adding that a fact and a story given together are found to be “22 times more effective” than a “raw fact.”

He also gave an example of how to use questions to break through communication barriers.

“If you’re in a conversation with someone of opposing views, and someone calls you an ‘anti-vaxxer,’ the first thing you need to do is question it: ‘What’s an anti-vaxxer? Can I generally be pro-science, but question one vaccine?’” Charalambous advised.

He further suggested that one could counter this label by asking about pro-vaccine professors and doctors, for example, that are now questioning this particular vaccine. “Are they anti-vaxxers?”

“When you start asking [questions], it breaks these caricatures. When you get over this context, you really connect,” Charalambous said. He added, however, that “If either of us get angry,” it’s “game over. The emotional brain takes over and the rational mind shuts down.”

And finally, he pointed out the power of establishing common ground, telling the story of a father of a 16-year old who had been vaccinated, and got defensive when a woman said the jab was “dangerous,” calling her accusation “disinformation.”

Charalambous said he went up to the father and said, “I’m on the same side as you.”

“What do you mean?” the man replied.

Charalambous recounted how he told him, “You’re here because you care for your family and your friends. That’s why I’m here. We just need to talk about the details.”

“The whole energy changed” after that, Charalambous said.

Charalambous’ organization, “Reaching People,” provides the public with in-depth communication tips via videos on topics such as “Getting a message to land” and “How to ethically influence.”