War Inc. Throws an Invasion Party and No One Shows Up 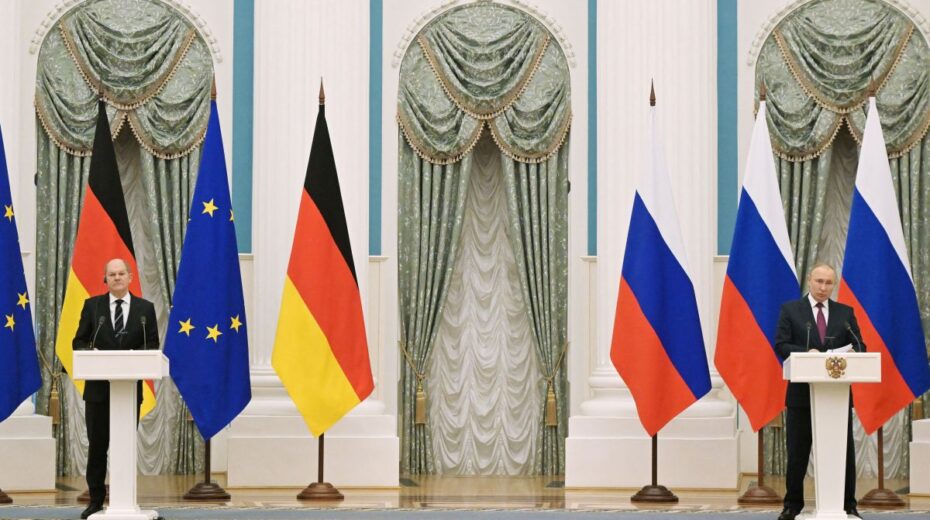 Moscow has not deviated for a moment from its Sun Tzu approach – while detailing all demands and all red lines many times over.

The Dem combo remote-controlling the senile President of the United States by earpiece/teleprompter was never accused of being the brightest bulbs in the room – any room.

That explains why one of their own, Nancy Pelosi, on ABC News, gave the whole Russian “invasion” game away two – or three – days, depending on their math, before the “canceled” non-event.

First she said, “If we were not threatening the sanctions and the rest, it would guarantee that Putin would invade.” And then the clincher:

“If Russia doesn’t invade, it’s not that he never intended to. It’s just that the sanctions worked.”

Here, fully unveiled, is the whole Dem “strategy”: a dubiously effective foreign policy “victory” which will melt away months ahead of the inevitable debacle at the US midterms.

Maria Zakharova, that female Slav counterpart of Hermes, the Messenger of the Gods in Ancient Greece, got closer to the truth while framing the psyops: “February 15, 2022 will go down in history as the day Western war propaganda failed. Humiliated and destroyed without a single shot fired.”

Add to it Foreign Minister Sergey Lavrov, unplugged, on “information terrorism”: “We have to learn from the tricks [our Western colleagues] pull.”

Putin, once again, applied Sun Tzu to win without a battle: “win” as in attending the objectives set for this round.

But it gets dicier. The Duma, by 78%, voted to ask the President to recognize the Donetsk and Luhansk People’s Republics as “separate, sovereign and independent” states.

The final decision rests with Putin, who has already hinted what happens next. Even as he qualified “what is happening now in Donbass” as “a genocide” – taking into context the previous eight years – he pointed out how “we must do everything to solve the problems of Donbass, but first of all, based on (…) the implementation of the Minsk agreements.”

What this means is that Putin will give Kiev yet another – final? – chance to implement Minsk: the agreement – enshrined as UN law – that the Americans have been de facto sabotaging since 2015.

Russia’s Security Council won’t be fooled, characterizing how “the West is conducting a carefully planned information operation against Russia based on the concept of ‘hybrid war’.” The Security Council also reaffirms that “European countries will be responsible for very likely provocations against the DPR and LPR from Kiev.” This is Patrushev speaking, not a deer-caught-in-the-headlights Jake Sullivan.

German Chancellor Scholz’s visit to Moscow was not exactly a Porsche negotiating Nurburgring. One never gets away spewing out platitudes in front of Putin. Scholz: “For our generation, war in Europe is unimaginable”. Putin: “One has already been unleashed by NATO against Belgrade.”

Valentina Matvienko, the speaker of the Russian Federation Council, once again has stressed the only possible way Russia would “intervene”: in the “event of an invasion of the Armed Forces of Ukraine in the DPR and LPR, Russia’s response will be proportionate to the scale of aggression.”

Even Scholz, timidly, has somehow agreed that like NATO in Yugoslavia, Russia in this case would have the right to invoke Responsibility to Protect (R2P) to save millions of Russian passport holders from the oligarchic Banderastan/neo-nazi shock troops of what Andrei Martyanov memorably described as country 404.

These include the Azov Batallion – which recruits neo-nazis from all across Europe – sporting Wolfsangel arm patches straight from the SS, and is now incorporated in Ukraine’s National Guard. The vast, CIA/MI6 “revitalized” stay-behind networks. And of course the in-progress $10 billion Eric Prince (Blackwater/Academi) scheme of setting up a private mercenary army via a partnership between the Lancaster 6 company and CIA-controlled Ukraine intel.

The serial American fake news/pysops/fog of war offensive did manage to obscure the two really crucial developments of the heady past few days.

Before the scheduled Russian non-invasion “invasion” was canceled, Martyanov had deliciously outlined how the “strategic ambivalence of Russia is terrifying for the US now because the US doesn’t know what will follow after the false flag, granted this false flag succeeds to dupe European poodles into utter submission.”

Yes, it ain’t over till the fat transgender sings. A false flag, or flags, remain on the radar – considering the tons of weapons showered on 404; over 150,000 troops massed right in front of the line of contact, equipped with absolutely lethal 120mm Grad rockets with warheads that when exploded, release thousands of sharp metal fragments; and the thousands of mercenaries trained by Polish, Brit and Blackwater/Academi instructors.

What really happened in the Kuril islands, between Hokkaido and Kamchatka, diplomatically described by Shoigu, eventually landed on Russian media. The first explanation was that a Russian vessel might have launched warning torpedoes against the American sub.

What happened was that the Virginia-class was detected by a Russian SSK or SSN, there was a sweep, and then the Marshal Shaposhnikov frigate used a sonar to intimate the uninvited guest to beat it. That was rather polite. In any other circumstances the Virginia-class would have been sunk.

Of course this should be interpreted for what it is: one more graphic illustration that the “indispensable nation” has lost its maritime invulnerability. Certainly to Russia. And sooner rather than later, also to China.

And that is a direct consequence of the dire state of the US defense industry, Martyanov’s key area of study, and exemplified by the latest report by the National Defense Industrial Association (NDIA).

The full report is here. Take a look, for instance, at this table charting the emphasis on research in emerging technologies.

Key areas such as space, hypersonics and cyber are down. In parallel, there’s an “increase” in three interconnected areas: AI, fully networked C3 and microelectronics. This would suggest the same old American obsession, since Rumsfeld, with deploying in a “smart battlefield”.

The key takeaway may be the increase in biotechnology. Because that would point to a desperate Empire – already outclassed by Russia and soon neutralized by China – resorting to biowarfare. It’s no wonder the landmark February 4 Russia-China joint statement pointedly refers to the danger of US bioweapon labs.

To the dustbin, Batman!

Moscow has not deviated for a moment from its Sun Tzu approach – while detailing all demands and all red lines many times over. Washington and Brussels have been warned in no uncertain terms that if they entice their goons/mercenaries to attack Donbass, 404 will be smashed to smithereens. And that is only the easily dismissible part of the package: all NATOstan security systems will also go.

Russia is waiting – like an army of Taoist monks. After the canceled “invasion”, it can even afford to enjoy some comic relief. The “technical and military” responses are ready – and once again: it’s their strategic ambiguity that is driving the Americans crazy. They are coming to realize they must negotiate indivisibility of security and missiles in Eastern Europe because no one in the Ukrainized Empire knows what Putin, Shoigu and Gerasimov could do next.

And then, there are the headless chickens. In the aftermath of the “invasion” not showing up as scheduled, G-7 Foreign Ministers will have an “emergency” meeting later his week in Germany to scratch their collective heads on why the invasion did not show up as scheduled.

As it stands, in the calm before the next storm, let’s sit back, relax and remember February 16, 2022: the day when the latest, concerted, full spectrum fake news psyops ended up hurling NATOstan’s “credibility” to a one-way trip to the dustbin of History.