‘Very difficult’ to send tanks and jets to Ukraine but we are looking at what we can do, Boris Johnson says 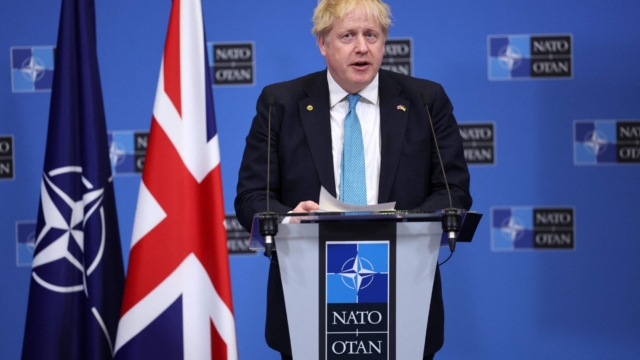 Britain is considering the possibility of sending Ukraine tanks and jets to help the country defend itself against Russia, Boris Johnson said last night.

Speaking to Nato leaders in Brussels, Volodymyr Zelensky dropped his demand for a no-fly zone over Ukraine but asked Western allies to send 1 per cent of their fighter planes and tanks to his country.

The Prime Minister warned that it would be “very difficult” to fulfil the request because of logistical problems but did not rule it out entirely. Mr Johnson told a press conference: “We are looking at what we can do to help. But logistically it looks very difficult both with armour and with jets.” He added: “What we are doing is steadily ratcheting up the movement of lethal but defensive weaponry to Ukraine, that is growing in volume the whole time.”

Nato and G7 allies used the summit to step up preparations for a possible chemical weapons attack by the Kremlin. Western countries are planning to send supplies to Ukrainian civilians to help them protect themselves from the arms. These could include “clothing, wash-up kits or detection kits”, an official said.

Mr Johnson said: “There is a visceral horror of the use of these weapons of mass destruction. I think that if Putin were to engage in anything like that, the consequences would be very, very severe… I think it would be catastrophic for him if he were to do that, and I think that he understands that.”

Joe Biden said that the West would “respond in kind” if the Kremlin excalated the conflict, telling reporters: “The nature of the response would depend on the nature of the use.” But a Western official added that Nato would not make its red lines public, saying: “We need to keep Putin guessing.”

Nato chief Jens Stoltenberg said: “Today, we agreed to do more, including cybersecurity assistance and equipment to help Ukraine protect against biological, chemical, radiological, and nuclear threats. This could include detection, protection, and medical supplies, as well as training for decontamination and crisis management.”

During the talks between national leaders, one suggested that Nato should open direct talks with Vladimir Putin, according to a source in the room – but that was rejected over fears it would allow the Kremlin to present the invasion of Ukraine as a conflict between Russia and the West reminiscent of the Cold War.

The Polish Government is understood to have warned that allies must not put pressure on Mr Zelensky to make concessions to Russia during ongoing peace talks. An official said the Ukrainian leader had a “gun to his head” in the negotiations while Russia refused to call a ceasefire.

Mr Johnson – who was yesterday called “the most active participant in the race to be anti-Russian” by a Kremlin spokesman – appeared to compare Mr Putin to Adolf Hitler, saying that the invasion was “the type of behaviour that we haven’t seen in the continent of Europe for 80 years”.

He pledged to block the Russian Government from accessing its international gold reserves and suggested that Ukraine’s football team should be handed automatic qualification to this year’s World Cup in a gesture of solidarity.

The Prime Minister denied being opposed to the Russian people and said: “I think I’m probably the only Prime Minister in UK history to be called Boris, I think I have that distinction, and I’m not remotely anti-Russian. But I think what we all agree is that what Vladimir Putin is doing, the way he’s leading Russia at the moment, is utterly catastrophic, that his invasion of Ukraine is inhuman and barbaric.”