US Provides Chemical And Biological Weapons Protection Equipments To Ukraine 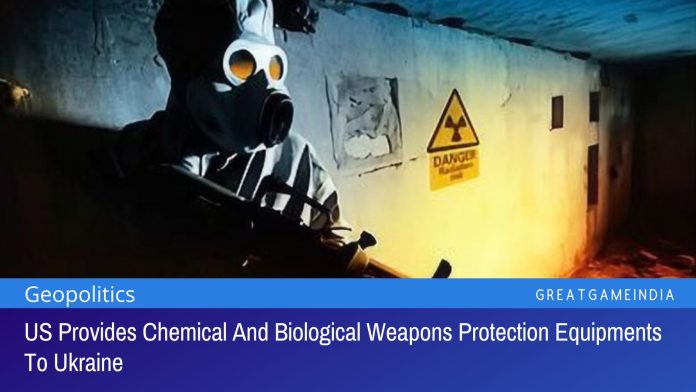 According to White House press secretary Jen Psaki, the US is preparing to provide chemical and biological weapons protection equipments to Ukraine. She didn’t say why Moscow would take such drastic measures, given its military dominance in terms of both manpower and equipment.

Psaki announced the aid effort on Friday, but did not specify what is being transported to Kiev. She went on to say that supporting Ukraine won’t jeopardise America’s ability to respond to similar assaults.

Psaki had hinted that Moscow might be prepared to use chemical or biological weapons against Ukraine a few weeks ago. She originally made the claim in response to Russian documents alleging that US-backed facilities in Ukraine were creating bioweapons. Psaki’s claims were not backed up by any proof.https://platform.twitter.com/embed/Tweet.html?creatorScreenName=greatgameindia&dnt=true&embedId=twitter-widget-0&features=eyJ0ZndfZXhwZXJpbWVudHNfY29va2llX2V4cGlyYXRpb24iOnsiYnVja2V0IjoxMjA5NjAwLCJ2ZXJzaW9uIjpudWxsfSwidGZ3X3NwYWNlX2NhcmQiOnsiYnVja2V0Ijoib2ZmIiwidmVyc2lvbiI6bnVsbH19&frame=false&hideCard=false&hideThread=false&id=1501676240180322311&lang=en&origin=https%3A%2F%2Fgreatgameindia.com%2Fchemical-biological-weapons-ukraine%2F&sessionId=bfdf2f76708a5a75818f1b271461e28523279ee2&siteScreenName=greatgameindia&theme=light&widgetsVersion=940dd9ee54270%3A1649359550911&width=550px

“This is all an obvious ploy by Russia to try to justify its further premeditated, unprovoked, and unjustified attack on Ukraine,” Psaki said last month. “Now that Russia has made these false claims, and China has seemingly endorsed this propaganda, we should all be on the lookout for Russia to possibly use chemical or biological weapons in Ukraine, or to create a false flag operation using them.”

The ongoing analysis of the hard drive of Hunter Biden’s laptop has revealed that there are multiple Department of Defense “encryption keys” on it. These keys allow access to DOD email accounts and databases. The exact number of these keys is still unknown. There may be dozens.

President Biden also raised concerns last week when he warned reporters during a trip to Europe that if Russia used chemical weapons in Ukraine, NATO would answer “in kind.” Officials from the White House then denied that the United States would employ chemical weapons, claiming that it was still against policy.

Officials in the Biden administration have dismissed the Russian allegations as “laughable” and “absurd,” but Chinese Foreign Ministry spokeswoman Zhao Lijian highlighted on Friday that Washington hasn’t provided “any constructive response” to the accusations. He said that the United States has engaged in the most bioweapons activities of any country, and that it is the only country opposed to the formation of multilateral verification of adherence with the Biological Weapons Convention (BWC).

“The international community has good reason to question the US bio-military activities,” Zhao said. Other countries have been accused of violating the BWC without giving “solid evidence” by the US  – in some cases to justify applying sanctions or waging war – but “when it comes to its own compliance, the US has tried to muddle through, which is unacceptable,” he added.