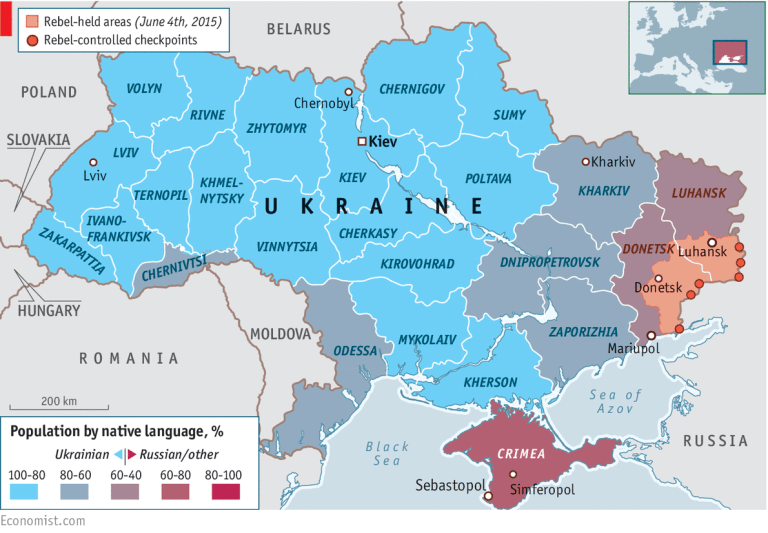 A brief overview of the situation in Ukraine and its geopolitical background.

As predicted by SPR more than a year ago, the current US Administration and its foreign policy strategists are now continuing their geopolitical campaign in Ukraine where they left off in 2016. Russia, in turn, appears to be determined to defend ‘annexed’ Crimea (base of the Russian Black Sea fleet) as well as Russian-speaking parts of the Donbass region in Eastern Ukraine (see map above).

To gain a deeper understanding of the current situation in Ukraine, the following resources may be of interest to some of our readers.

To learn more about the general geopolitical background and importance of Ukraine, read “The Grand Chessboard: American Primacy and Its Geostrategic Imperatives” (PDF), the classic 1997 book by former US National Security Advisor and CFR director Zbigniew Brzezinski (excerpts in the annex below). Brzezinski predicted that between 2005 and 2010, Ukraine “should become ready for serious negotiations with both the EU and NATO”. In 2004/2005, the US helped organize the successful “Orange Revolution” in Kiev; when its results were reversed in 2010, the US helped organize the more forceful “EuroMaidan” in 2013/2014. In response, Russia took control over Crimea and supported the de facto secession of Russian-speaking parts of Eastern Ukraine.

To explore the many “NGOs” that helped prepare the Ukrainian revolutions or regime changes, see our extensive list of 1600 organizations (including “Bellingcat”) funded by the US National Endowment for Democracy (NED), essentially a civil society front of the CIA.

To relive the famous “fuck the EU” phone call between then US Assistant Secretary of State Victoria Nuland and then US Ambassador to Ukraine, Geoffrey Pyatt, see the transcript and audio version on the BBC website. During the call, which was held prior to the Euromaidan revolution or regime change in February 2014, Nuland and Pyatt discussed who should “go into” the future Ukrainian government. Victoria Nuland today is US Under Secretary of State for Political Affairs.

To learn more about the “Maidan massacre” in February 2014, watch The Snipers’ Massacre on the Maidan in Ukraine (18+) by University of Ottawa professor Ivan Katchanovski. Essentially, it looks like the US employed Ukrainian nationalist combatants and foreign mercenary snipers (mainly from Georgia) to escalate the situation in Kiev and achieve a second revolution or regime change.

To learn more about the unsolved downing of flight MH-17 over Eastern Ukraine on 17 July 2014, watch “MH17 – Call for Justice” (2019) or read MH17 – 1000 days (2017). The current evidence points to a possible NATO/Ukrainian operation and subsequent deception or botched operation and subsequent cover-up (similar to Itavia 870 in 1980) – although a fatal mistake by Eastern Ukrainian rebels, perhaps in response to an aerial provocation, remains also a possibility.

To learn more about the apparent involvement of the Biden family in Ukrainian gas market corruption, watch the Biden Ukraine Bribe Tapes, which contain astounding leaked phone calls between then US Vice President Biden and then Ukrainian President Poroshenko, as well as key witness testimonies. In 2020, President Trump and his legal advisor Giuliani tried to leverage this material against the Biden presidential campaign, but they were intercepted by the DOJ and FBI.

To learn more about Trump’s decades-long relationship not with “the Russians”, but with mainly Jewish “businessmen” in Ukraine and Russia, read Trump and Russia: The Countless Israeli Connections (Haaretz) or watch Trump and Russia: Mafia Money Laundering. Essentially, the Trump Presidency may have to be seen, to a significant extent, as an Israeli operation that was aimed at preventing Clinton, terminating Obama’s Iran nuclear deal, and moving the US embassy in Israel from Tel Aviv to Jerusalem. SPR will cover this topic in much more detail in a future analysis.

To learn more about the supposedly Russian computer hacks against the US Democratic Party and some European targets in 2016 – most likely run by the FBI, NATO partners, and NATO-affiliated cyber security contractor CrowdStrike – read “Russian Hacking”: NATO PsyOp Revealed.

To better understand why Western media reporting on geopolitical conflicts is mostly propaganda, read The American Empire and its Media, The “Integrity Initiative”, and The Propaganda Multiplier (about news agencies) or watch The CIA and the Media (Channel 4, 1986). To learn more about Russian propaganda techniques, read our analysis on Russian Propaganda.

To compare media outlets providing different geopolitical perspectives, take a look at the SPR Media Navigator. If war should break out in Ukraine, check dedicated platforms such as South Front.

To watch a documentary that combines many of the above topics, see The Magnitsky Act: Behind The Scenes, possibly the most censored political movie in recent years.

Image 3: Russian President Putin on the covers of Western magazines (2014)

“Ukraine, a new and important space on the Eurasian chessboard, is a geopolitical pivot because its very existence as an independent country helps to transform Russia. Without Ukraine, Russia ceases to be a Eurasian empire. Russia without Ukraine can still strive for imperial status, but it would then become a predominantly Asian imperial state, more likely to be drawn into debilitating conflicts with aroused Central Asians, who would then be resentful of the loss of their recent independence and would be supported by their fellow Islamic states to the south. China would also be likely to oppose any restoration of Russian domination over Central Asia, given its increasing interest in the newly independent states there. However, if Moscow regains control over Ukraine, with its 52 million people and major resources as well as its access to the Black Sea, Russia automatically again regains the wherewithal to become a powerful imperial state, spanning Europe and Asia. Ukraine’s loss of independence would have immediate consequences for Central Europe, transforming Poland into the geopolitical pivot on the eastern frontier of a united Europe. [page 84:] Somewhere between 2005 and 2010, Ukraine, especially if in the meantime the country has made significant progress in its domestic reforms and has succeeded in becoming more evidently identified as a Central European country, should become ready for serious negotiations with both the EU and NATO.”