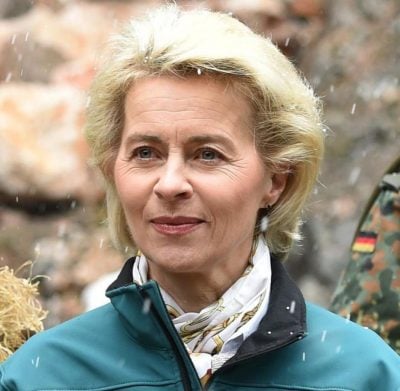 The  European Commission president Ursula von der Leyen announced that, despite Putin’s warning, the EU is going to finance the purchase and delivery of weapons to Ukraine.  She also said the EU is going to include Belarus, which is not involved in the fighting, in the sanctions, because it is a Russian ally. She says the EU wants to ban Russian media because they don’t keep to the official war narrative.

So, the European Commission president announces that the EU is joining the war on the side of the Ukrainian Nazis, and Washington’s  UN Ambassador accuses Putin of escalating the war.

We see here the results of Putin’s far too many years of keeping his patience with the West.  The West has grown accustomed to imposing punishment upon punishment on Russia with no consequences to itself.  Now suddenly there are consequences, and it is all Putin’s fault.

I have warned for a number of years that the policy of patience would fail in the end because the West would keep pushing until it blundered across a red line. That has now occurred, and the consequences will be far more serious than if Russia had put her foot down long ago.

Russophobic morons accuse me of being pro-Russian because I provide objective analysis instead of joining in the mindless denunciations.  I am the one who saw nuclear war coming because of the mistaken policies of both sides.  It is the Western Russophobes and the naive Russian trust in negotiations that have misfired.  Unfortunately, it is my analysis that is proving to be correct. I can’t say I am happy about it.Stop the Possible World War III Scenario! International Peace Conference to Dissolve NATO and for Global Denuclearization. Prof. Francis Boyle

UPDATE: It is stunning that no one in the Western leadership or media understood that Russia was serious about her security concern. Whether the West regarded the Kremlin’s concern as warranted or not, everything should have been done to reassure Russia. Instead, the opposite was done.  Stoltenberg said “if the Kremlin’s aim is to have less NATO on its borders, it will only get more NATO.” What an arrogantly stupid thing to say.  This reckless statement is made by the secretary general of NATO. He should have been instantly removed from office.

I pointed out 8 days ago that this extremely aggressive response to a sincere security concern of a major military power would have very serious consequences. It convinced the Kremlin that Russia’s security concern could not be settled by negotiation. It was Stoltenberg who set the Russians on the course of invasion.

The West no longer has any Russian experts. The West has people directly or indirectly on the military/security complex’s payroll who do nothing but excoriate Russia. The West has zero ability to see the other side. Moreover, the West to show its inclusiveness appoints females as  defense ministers, national security advisers and heads of European Commission. The women have to show they are as tough as men and consequently make even worse decisions.

Indeed, we are on the point of ceasing to exist simply because the Western World is not capable of making a sensible decision.

The West has done nothing but stir the flames of war and now is close to being consumed in these flames.

Dr. Paul Craig Roberts writes on his blog site, PCR Institute for Political Economy, where this article was originally published. He is a regular contributor to Global Research.

“Towards a World War III Scenario: The Dangers of Nuclear War”

Available to order from Global Research!

Michel Chossudovsky is Professor of Economics at the University of Ottawa and Director of the Centre for Research on Globalization (CRG), which hosts the critically acclaimed website www.globalresearch.ca . He is a contributor to the Encyclopedia Britannica. His writings have been translated into more than 20 languages.

“This book is a ‘must’ resource – a richly documented and systematic diagnosis of the supremely pathological geo-strategic planning of US wars since ‘9-11’ against non-nuclear countries to seize their oil fields and resources under cover of ‘freedom and democracy’.”
–John McMurtry, Professor of Philosophy, Guelph University

“In a world where engineered, pre-emptive, or more fashionably “humanitarian” wars of aggression have become the norm, this challenging book may be our final wake-up call.”
-Denis Halliday, Former Assistant Secretary General of the United Nations

Michel Chossudovsky exposes the insanity of our privatized war machine. Iran is being targeted with nuclear weapons as part of a war agenda built on distortions and lies for the purpose of private profit. The real aims are oil, financial hegemony and global control. The price could be nuclear holocaust. When weapons become the hottest export of the world’s only superpower, and diplomats work as salesmen for the defense industry, the whole world is recklessly endangered. If we must have a military, it belongs entirely in the public sector. No one should profit from mass death and destruction.