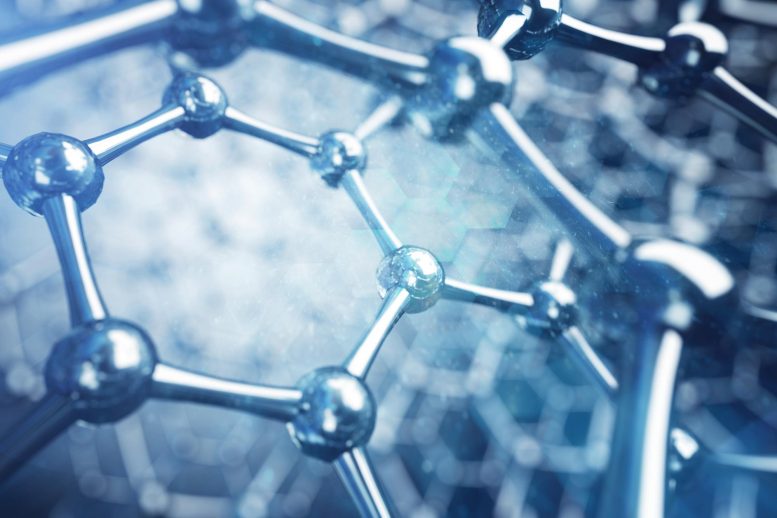 When two sheets of graphene are stacked atop each other at just the right angle, the layered structure morphs into an unconventional superconductor, allowing electric currents to pass through without resistance or wasted energy.

This “magic-angle” transformation in bilayer graphene was observed for the first time in 2018 in the group of Pablo Jarillo-Herrero, the Cecil and Ida Green Professor of Physics at MIT. Since then, scientists have searched for other materials that can be similarly twisted into superconductivity, in the emerging field of “twistronics.” For the most part, no other twisted material has exhibited superconductivity other than the original twisted bilayer graphene, until now.

In a paper appearing in Nature, Jarillo-Herrero and his group report observing superconductivity in a sandwich of three graphene sheets, the middle layer of which is twisted at a new angle with respect to the outer layers. This new trilayer configuration exhibits superconductivity that is more robust than its bilayer counterpart.

The researchers can also tune the structure’s superconductivity by applying and varying the strength of an external electric field. By tuning the trilayer structure, the researchers were able to produce ultra-strongly coupled superconductivity, an exotic type of electrical behavior that has rarely been seen in any other material.

“It wasn’t clear if magic-angle bilayer graphene was an exceptional thing, but now we know it’s not alone; it has a cousin in the trilayer case,” Jarillo-Herrero says. “The discovery of this hypertunable superconductor extends the twistronics field into entirely new directions, with potential applications in quantum information and sensing technologies.”

His co-authors are lead author Jeong Min Park and Yuan Cao at MIT, and Kenji Watanabe and Takashi Taniguchi of the National Institute of Materials Science in Japan.

Shortly after Jarillo-Herrero and his colleagues discovered that superconductivity could be generated in twisted bilayer graphene, theorists proposed that the same phenomenon might be seen in three or more layers of graphene.

A sheet of graphene is an atom-thin layer of graphite, made entirely of carbon atoms arranged in a honeycomb lattice, like the thinnest, sturdiest chicken wire. The theorists proposed that if three sheets of graphene were stacked like a sandwich, with the middle layer rotated by 1.56 degrees with respect to the outer layers, the twisted configuration would create a kind of symmetry that would encourage electrons in the material to pair up and flow without resistance — the hallmark of superconductivity.

“We thought, why not, let’s give it a try and test this idea,” Jarillo-Herrero says.

Park and Cao engineered trilayer graphene structures by carefully slicing a single gossamer sheet of graphene into three sections and stacking each section on top of each other at the precise angles predicted by the theorists.

They made several trilayer structures, each measuring a few micrometers across (about 1/100 the the diameter of a human hair), and three atoms tall.

“Our structure is a nanosandwich,” Jarillo-Herrero says.

The team then attached electrodes to either end of the structures, and ran an electric current through while measuring the amount of energy lost or dissipated in the material.

“We saw no energy dissipated, meaning it was a superconductor,” Jarillo-Herrero says. “We have to give credit to the theorists — they got the angle right.”

He adds that the exact cause of the structure’s superconductivity — whether due to its symmetry, as the theorists proposed, or not — remains to be seen, and is something that the researchers plan to test in future experiments.

“For the moment we have a correlation, not a causation,” he says. “Now at least we have a path to possibly explore a large family of new superconductors based on this symmetry idea.”

The team used the same method to tune trilayer graphene. They also discovered a second way to control the material’s superconductivity that has not been possible in bilayer graphene and other twisted structures. By using an additional electrode, the researchers could apply an electric field to change the distribution of electrons between the structure’s three layers, without changing the structure’s overall electron density.

“These two independent knobs now give us a lot of information about the conditions where superconductivity appears, which can provide insight into the key physics critical to the formation of such an unusual superconducting state,” Park says.

Using both methods to tune the trilayer structure, the team observed superconductivity under a range of conditions, including at a relatively high critical temperature of 3 kelvins, even when the material had a low density of electrons. In comparison, aluminum, which is being explored as a superconductor for quantum computing, has a much higher density of electrons and only becomes superconductive at about 1 kelvin.

“We found magic-angle trilayer graphene can be the strongest coupled superconductor, meaning it superconducts at a relatively high temperature, given how few electrons it can have,” Jarillo-Herrero says. “It gives the biggest bang for your buck.”

The researchers plan to fabricate twisted graphene structures with more than three layers to see whether such configurations, with higher electron densities, can exhibit superconductivity at higher temperatures, even approaching room temperature.

“If we could make these structures as they are now, at industrial scale, we could make superconducting bits for quantum computation, or cryogenic superconductive electronics, photodetectors, etc. We haven’t figured out how to make billions of these at a time,” Jarillo-Herrrero says.

This research was supported, in part, by the Department of Energy, the National Science Foundation, the Gordon and Betty Moore Foundation, and the Ramon Areces Foundation.