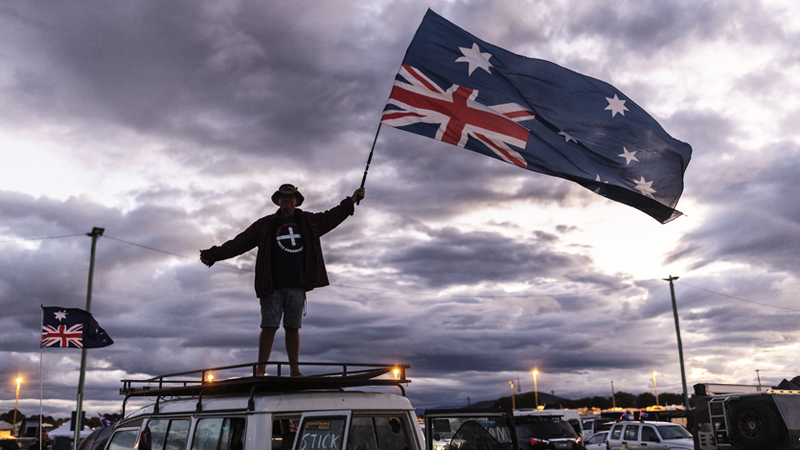 Australian police have been deploying directed energy weapons (DEWs) against the peaceful Freedom Convoy protesters around the capital, according to reports.

Disturbing videos and photos circulating social media show Canberra protesters, including women and children, who appear to have been badly burned by directed microwave energy weapons, with blisters on their faces, arms, and torsos.

Numerous people on social media also claimed they suffered microwave radiation injuries, even through their clothes.

Two Australian senators even grilled Australia Federal Police Commissioner Reece Kershaw over the use of these DEWs against peaceful protesters earlier this week.https://www.youtube.com/embed/2jRNRBK3jgE

Other videos appear to confirm the Senators’ accusations, showing Canberra police setting up DEWs, which could be directed microwave emitters or Long Range Acoustic Devices (LRAD), as some protesters have reported feeling nausea, vertigo, dizziness, and other symptoms associated with acoustic crowd control weaponry.

One protester captured footage of a DEW retrofitted onto the top of an incognito law enforcement vehicle before it sped away.

They are using LRAD Weapons on you, what else can you say about how evil they are pic.twitter.com/FdWFkwnf1A— bombaybadboy (@bombaybadboy) February 19, 2022

Australian police had purchased these LRAD devices as early as 2016.

If the reports of the microwave energy weapons against civilians are true, the Canberra police could have likely violated the Geneva Convention rules, which represents a war crime.