Russia targets Ukrainian military base near Polish border in escalation 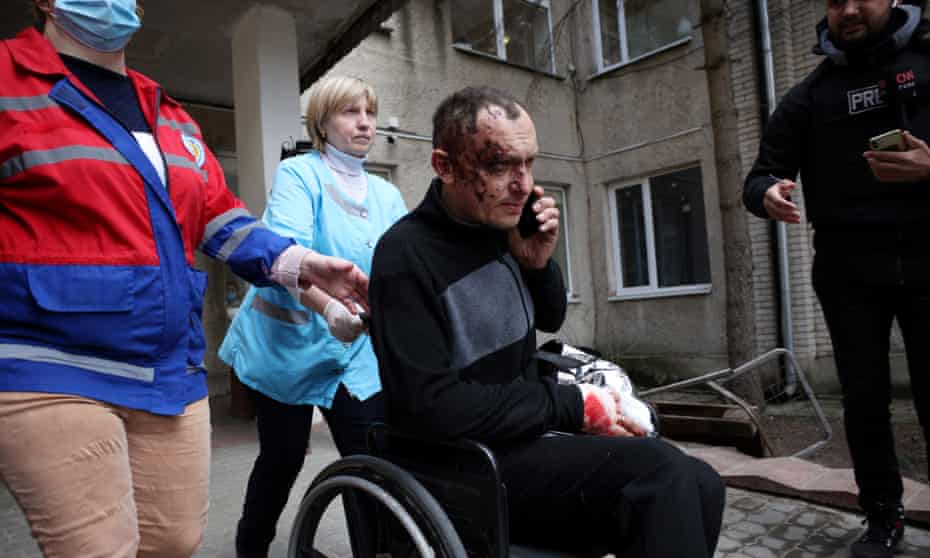 Russia drew warnings from Nato on Sunday after it escalated its war in Ukraine with strikes on a major military base close to the alliance’s border, killing at least 35 people and injuring 134 more, while a US journalist was killed by Russian forces in a town outside Kyiv.

The airstrikes on the Yavoriv base in the far-west of Ukraine came hours after the Kremlin, which said western military equipment destined for Ukrainian forces was being stored at the facility, had described western supply lines into Ukraine as “legitimate targets”.

A Russian military spokesperson claimed that up to 180 “foreign mercenaries and a large consignment of foreign weapons” were destroyed in the attack.

Britain said the incident marked a “significant escalation” of the conflict and the proximity of the attack to Poland’s border, less than 10 miles away, prompted the US national security adviser, Jake Sullivan, to warn that any fire, even accidental, on a neighbouring Nato country would trigger a full-force Nato response.

Sullivan said the US was consulting allies and in contact with the Kremlin directly to warn against the use of chemical weapons amid fears that Russia may be preparing the ground for the use of them.https://interactive.guim.co.uk/uploader/embed/2022/03/ukraine_invasion_1303/giv-825ggFu0NhonE09/

Describing the bombing of the Yavoriv International Centre for Peacekeeping and Security, Stepan Chuma, 27, an emergency worker who had hurried to the scene with his colleagues, said: “My windows shook. The whole house vibrated. It was dark. The sky lit up with two explosions.”

The attack prompted the Ukrainian president, Volodymyr Zelenskiy, to repeat his pleas for Nato to impose a no-fly zone, and he warned the alliance that it was at risk. “If you don’t close our sky, it is only a matter of time before Russian rockets fall on your territory, on Nato territory,” he said in a video address late last night.

Fighting on the frontlines between Russian invaders and Ukrainian defenders continued on Sunday, with civilians in the southern port city of Mariupol, under siege since early this month, facing what the International Committee of the Red Cross warned could be a “worst-case scenario” without an agreement on humanitarian aid and evacuations.

Zelenskiy said that a convoy carrying 100 tons of humanitarian aid was on its way to the city, where more than 2,000 civilians have died, and that all necessary diplomatic efforts had been taken to make sure it reaches those in need.

Meanwhile, a second mayor in south-east Ukraine was abducted by occupying Russian soldiers. The kidnapping of the mayor of Dniprorudne followed the seizure of the mayor of Melitopol because “he refused to cooperate with the enemy”, according to the Ukraine parliament. The UK prime minister, Boris Johnson, told Zelenskiy in call on Sunday he condemned the abductions.

The Yavoriv facility hit by Russia on Sunday has previously hosted foreign military trainers from the UK, US and other countries, but it was not clear whether any were at the base. Ukraine held most of its drills with Nato countries there before the invasion, with the last major exercises in September. Nato denied it had any personnel in Ukraine and the Pentagon said its last people had left weeks ago.

“Russia has attacked the International Centre for Peacekeeping & Security near Lviv. Foreign instructors work here. Information about the victims is being clarified,” the Ukrainian defence minister, Oleksii Reznikov, said in an online post.

The 140 sq mile facility less than 15 miles from the Polish border is the largest in the western part of the country, and serves a similar function to the British army’s training areas on Salisbury Plain.https://interactive.guim.co.uk/uploader/embed/2022/03/ukraine_yavoriv_zoom/giv-825hx5qIXuqvvtB/

The attack on the base is significant for a number of reasons. Long viewed with suspicion by Russia – whose media have claimed falsely that in the past the facility was a secret Nato base in Ukraine – the proximity to the Polish border means it marks a sharp escalation in the scope of Russian airstrikes.

There has been speculation too that the area has been used to receive incoming weapons shipments for Ukraine’s military and in the training of the large numbers of foreign volunteers flocking to the country.

Simon Shuster, of Time magazine, who was in the area the day before, said on Twitter: “When Russia bombed the base near Lviv last night, it had to assume Americans were likely to be killed or injured. A coordinator of foreign volunteers in Ukraine told me the base was a hub for 1000s of them, coming from all over to help Ukraine. I met some from US, UK, Australia.”

Supporters of Ukraine, including the UK, Germany and the US, have been shipping thousands of anti-tank and anti-aircraft missiles into Ukraine using the country’s western corridor in the Lviv region.

Russia’s deputy foreign minister, Sergei Ryabkov, on Saturday said Russia had “warned the US that pumping weapons from a number of countries it orchestrates isn’t just a dangerous move, it’s an action that makes those convoys legitimate targets”.

The attack is thought to be the westernmost carried out by Russia in 18 days of fighting.

As Sunday wore on, heavy fighting continued on multiple fronts across the country, including the southern shipbuilding centre of Mykolaiv, where authorities reported nine people killed in bombings as Russian forces attempted to bypass the city en route to Odesa.

Officials in Popasna in the eastern Donbas region accused Russian forces of using white phosphorus shells on the city. The weapons are banned under international law in heavily populated civilian areas but permitted in open spaces. Ukraine defence ministry spokesperson Markiyan Lubkivsky said Putin’s plan was “to make from Ukrainian cities numerous Aleppos”, in reference to the Syrian city heavily bombed by Russia and its Syrian regime allies.

Russian fighters once again targeted the airport in the western city of Ivano-Frankivsk. Another airstrike hit a westward-bound train evacuating people from the east, killing one person and injuring another, Donetsk’s chief regional administrator said.

Around the capital, Kyiv, a major political and strategic target for the invasion, fighting intensified, with overnight shelling in the north-western suburbs and a missile strike on Sunday that destroyed a warehouse in the east.

Brent Renaud, an award-winning US film-maker whose work has appeared in the New York Times and other outlets, was killed by Russian forces in the flashpoint town of Irpin, near Kyiv. A US photographer, Juan Arredondo, was wounded.

“But the invaders have no natural basis for normal life. So that people can feel happy and dream. They are organically incapable of making life normal. Wherever Russia comes to a foreign land, dreams are impossible.”

Despite the violence, both sides said they thought progress could be made at bilateral talks that have been held periodically since Russia invaded on 24 February, although they gave no details of what might be agreed.

“Russia is already beginning to talk constructively,” the Ukrainian negotiator and presidential adviser Mykhailo Podolyak said in a video posted online. “I think that we will achieve some results literally in a matter of days.”

A Russian delegate to the talks with Ukraine, Leonid Slutsky, was quoted by the RIA news agency as saying they had made significant progress and it was possible that the delegations could soon reach draft agreements.

Neither side said what these would cover. Three rounds of talks between the two sides in Belarus, most recently last Monday, had focused mainly on humanitarian issues.

In Russia, more than 800 people were detained by police for protesting against its invasion of Ukraine. OVD-Info, which monitors arrests during protests, said police had detained 817 people during demonstrations in 37 cities in Russia.

A reporter for Agence France-Presse at a protest in Moscow witnessed a young woman shouting “peace to the world” taken away by police, some of whom had the letter “Z” – a symbol of the war – in the colours of the Russian flag on their helmets.