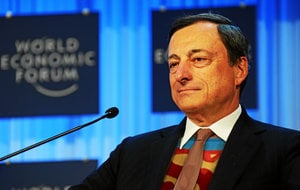 All Global Research articles can be read in 51 languages by activating the “Translate Website” drop down menu on the top banner of our home page (Desktop version).

Prime Minister Draghi pulls straight on increasing military spending, with the full support of the President of the Republic. For Italy, this means going from the current 26 billion euros a year to at least 38 billion a year, or from 70 to over 100 million euros a day spent on public money.

The decision was actually taken not in Rome but in Brussels, at the NATO Summit of Heads of State and Government. The increase in NATO military expenditure is driven by the United States: the Pentagon budget is increased by 10% to 773 billion dollars, to which other military expenditures  are added, bringing the total to over 1.000 billion dollars annually.Italy Protest Movement against the “Vaccine Passport”

NATO under US command is intensifying its military escalation in Europe, following the same strategy that provoked the Russian response with the military operation in Ukraine. To the four battle groups already deployed in Poland and the three Baltic republics, NATO is adding four more in Bulgaria, Hungary, Romania and Slovakia. Their function is not only against Russia, however.

In Bulgaria, the defense minister, deemed untrustworthy, was deposed by NATO order and replaced by Bulgaria’s ambassador to NATO. In Hungary, where general elections are held on April 3rd, Prime Minister Orbán opposes the country’s involvement in the escalation of war against Russia, refusing to supply arms to Ukraine, and declares that Hungary wants to increase imports of Russian gas. Conversely, the left declares that, if it goes to government, it will adopt sanctions on Russian gas supplies and send arms to Ukraine.

Meanwhile, the U.S. and the European Union have formed a joint task force to reduce Russian gas supplies to Europe and replace it with U.S.-supplied liquefied natural gas. However, this is much more expensive than Russian gas and has very volatile prices. Hence the colossal increase in energy expenditure in Italy and Europe, which prepares for a disastrous economic crisis.

Grandangolo can also be seen on live TV on cell phones or computers on the site.

From the Tuesday following the first broadcast, the episode of Grandangolo is visible, together with the previous ones, on the site.