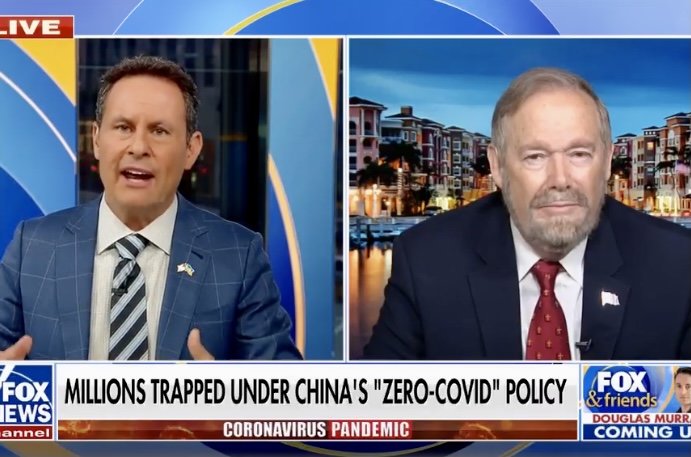 China expert Steve Mosher warned Wednesday that the deadly toll of Shanghai’s ongoing lockdowns will be “much greater” than any potential lives lost due to COVID-19.

“I don’t know how many lives they’re going to save from coronavirus in Shanghai, but I guarantee when they finally go into some of these apartments where people have been locked up for three or four weeks, they’re going to find dead bodies of people who’ve starved to death, people who have died of strokes and heart attacks,” the “Bully of Asia” author told Brian Kilmeade on “Fox & Friends.”

According to Shanghai resident Qin Chen, many in the city have been locked down since the first weeks of March, with the first neighborhood or community-enforced lockdowns beginning March 2 to March 17. Since then, Shanghai has mandated the lockdowns for the whole city, sometimes enforcing residence confinement by sealing or padlocking doors, as CNN correspondent David Culver has reported.

Chen noted Tuesday that some Shanghai residents have been confined for more than 40 days. The city has reportedly issued a notice informing residents that the city will be locked down until at least May 1.

Kilmeade noted to Mosher that the city, which has been instructed by Beijing to enforce a “zero-COVID” policy, began lockdowns after more than 22,000 COVID cases were reported, most of them asymptomatic.

“It makes no sense in epidemiological terms,” Mosher said. “You’re never going to stamp out a highly infectious respiratory virus that spreads so easily. The rest of the world has realized this.”

He added, “Everyone realizes that we’re just going to have to live with the coronavirus forever,” alluding to the near-consensus by immunologists that COVID will continue to circulate for years to come as an endemic virus.

“And what are they doing in Shanghai? They’re killing dogs and cats because they might be carrying coronavirus. They’re locking people up in their homes. People are literally starving to death,” Mosher said.

Fox News host Tucker Carlson pointed out Monday that after the initial COVID-19 outbreak in Wuhan, residents were sometimes welded inside their homes by government officials, as videos posted by locals show, and some of them ended up starving to death.

Considering that the health of its citizens is the pretext for the Shanghai lockdowns, Kilmeade asked Mosher what the real explanation for the lockdowns is.

According to Mosher, there are a few reasons for the Shanghai lockdowns, none of which actually stem from concerns about COVID. He pointed out that China’s head of national health has said that they can’t “stop now,” because if they did so, “everything [they] did in the past would be in vain.”

“Well, everything you did in the past was a mistake, so admit it and move on,” Mosher told Kilmeade. “But they won’t because politicians never like making a mistake.”

Mosher believes the lockdowns are caused at least in part by an ongoing “power struggle”: “President Xi Jinping wants to be president for life, and the Shanghai faction is fighting it,” Mosher said. “Well, guess what? Shanghai is now locked down.”

He emphasized that it is a classic totalitarian tactic to intimidate the populace through targeted persecution, noting that there is a Chinese phrase that means, “You kill the one to warn the hundred.”

“By locking down 26 million people in Shanghai, you’re telling the other 1.4 billion people, ‘We’re in charge. We’re the Chinese Communist Party. We can do whatever we want with your lives. We can dictate how much you eat, when you eat, and whether or not you starve to death,” Mosher said.