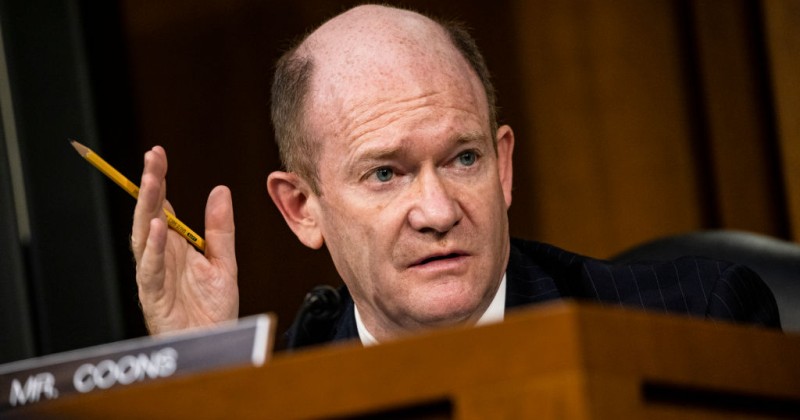 President Joe Biden’s closest Senate ally has suggested that US troops should be deployed to Ukraine over fears the country will “become the Syria of Eastern Europe.”

Senator Chris Coons made the comments during a CBS News interview on Sunday.

“The American people cannot turn away from this tragedy in Ukraine,” said Coons, adding, “I think the history of the 21st century turns on how fiercely we defend freedom in Ukraine and that Putin will only stop when we stop him.”

Coons went on to suggest that the “level of brutality” being displayed by Russian forces may necessitate direct US military involvement.

“If Vladimir Putin, who has shown us how brutal he can be, is allowed to just continue to massacre civilians, to commit war crimes throughout Ukraine without NATO, without the West coming more forcefully to his aid, I deeply worry that what’s going to happen next is that we will see Ukraine turn into Syria,” Coons said.https://platform.twitter.com/embed/Tweet.html?dnt=true&embedId=twitter-widget-4&features=eyJ0ZndfZXhwZXJpbWVudHNfY29va2llX2V4cGlyYXRpb24iOnsiYnVja2V0IjoxMjA5NjAwLCJ2ZXJzaW9uIjpudWxsfSwidGZ3X3NwYWNlX2NhcmQiOnsiYnVja2V0Ijoib2ZmIiwidmVyc2lvbiI6bnVsbH19&frame=false&hideCard=false&hideThread=false&id=1515787829342789646&lang=en&origin=https%3A%2F%2Fsummit.news%2F2022%2F04%2F18%2Fbidens-closest-senate-ally-suggests-us-troops-be-sent-to-ukraine%2F&sessionId=1159c7dd8ba5a80a9d5e7298b7dcd7dd44e14b11&theme=light&widgetsVersion=c8fe9736dd6fb%3A1649830956492&width=550px

During a previous speech at an event at the University of Michigan, Coons asserted that Putin and other “autocrats around the world” would be emboldened if if US boots on the ground were ruled out.

Coons is known as “Biden’s eyes and ears in the Senate,” while others have labeled him the White House’s “shadow secretary of state.”

As we previously highlighted, there are already US boots on the ground in Ukraine, although an official deployment of Americans forces would be hugely controversial move.

French journalist Georges Malbrunot, who returned from Ukraine after arriving with volunteer fighters, said the Pentagon was already overseeing much of the conflict.

“I had the surprise, and so did they, to discover that to be able to enter the Ukrainian army, well it’s the Americans who are in charge,” said Malbrunot.

The Pentagon previously indicated that it thinks the war will last for years rather than months, while the Washington Post reported that it was in NATO’s interest to prolong the conflict as much as possible.

Brand new merch now available! Get it at https://www.pjwshop.com/

ALERT!In the age of mass Silicon Valley censorship It is crucial that we stay in touch.

I need you to sign up for my free newsletter here.

Support my sponsor – Turbo Force – a supercharged boost of clean energy without the comedown.