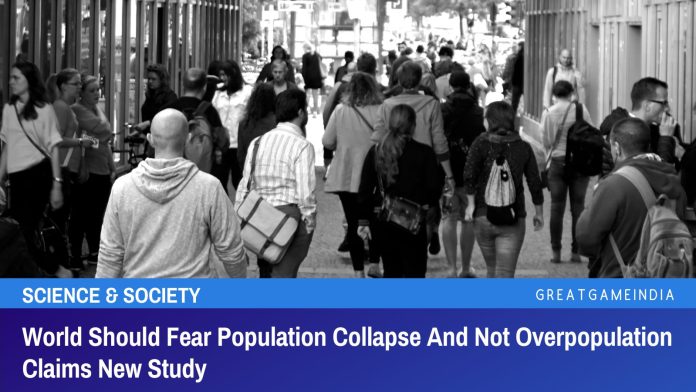 Demographers warn that new research reveals the world is headed for a population collapse, not an era of overpopulation, contrary to UN projections.

While the UN anticipates that humanity’s population will continue to expand until 2100, peaking at nearly 11 billion people, a demographic study (pdf below) published in The Lancet concluded that the world is only a few decades away from a sharp and substantial population decline.

Researchers in an October 2020 study titled “Fertility, mortality, migration, and population scenarios for 195 countries and territories from 2017 to 2100: a forecasting analysis for the Global Burden of Disease Study” theorize that while the human population will continue to grow until 2064, reaching approximately 9.73 billion – right now, the population is around 8 billion – the population will dwindle by over a billion in the remaining part of the century due to low fertility rates.

According to the report, China would have a population of 773 million by the year 2100, compared to 1.39 billion today, with fertility rates significantly below the replacement level of 2.1 child per woman. Such a drop represents a decrease in population of nearly 50%.

Earth could sustain many times its current human population and the ecosystem would be fine. We definitely don’t have “too many people”.— Elon Musk (@elonmusk) June 6, 2022

While China is expected to face the greatest fall in raw numbers, countries such as Thailand, Japan, and Spain will see population reductions of more than 50%.

Many countries are already experiencing rapid population declines based just on fertility rates, without taking immigration into consideration.

While the overpopulation narrative receives a lot of attention in the media, thanks in part to the support of so-called climate change activists and globalist institutions like the United Nations, many people have been warning about humanity’s future for decades as fertility rates continue to plummet.

Steven Mosher, head of the Population Research Institute, was one of these experts, writing in The Wall Street Journal in 1997:

Too few children will be humanity’s long-term problem, not too many: too few children to fill schools and universities, too few young people entering the workforce, too few couples purchasing homes and second cars.

In other words, there aren’t enough consumers and producers to propel the economy ahead. Europe’s disintegrating markets and Japan’s economic sluggishness will soon spread to the United States and the rest of the world. Why spend hundreds of millions of dollars a year on contraception and sterilization if it simply delays that day?

Read the study article below:GreatGameIndia is being actively targeted by powerful forces who do not wish us to survive. Your contribution, however small help us keep afloat. We accept voluntary payment for the content available for free on this website via UPI, PayPal and Bitcoin.