Ukraine Is Just The Starting Point Of A Bigger Crisis 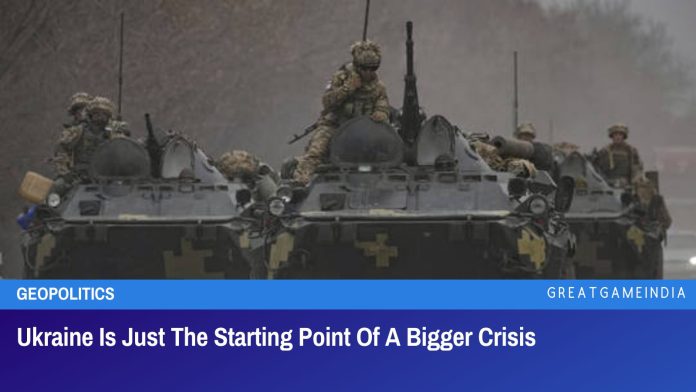 We are most likely at the outset of a crisis that will take time to resolve. It is apparent that Ukraine is just the starting point of a bigger crisis and observing how it unfolds is crtical.

Why should every Russian and Ukrainian be concerned about Russian-Ukrainian relations? To some sense, what is taking place is a delayed civil war, which could have occurred in the early 1990s with the dissolution of the Soviet Union, when the first generation of Russian and Ukrainian leaders claimed that they had escaped a brutal divorce like Yugoslavia, writes Andrey Sushentsov in Russia Today.

Everyone in Russia has relations in the adjacent country, so what is going on there is primarily a domestic political issue. If the Ukrainian government, for example, shuts Russian Orthodox churches or outlaws a pro-Russian opposition political organization, the news is broadcast on state television almost immediately, and Russian politicians give responses.

Each of the post-Soviet governments acquired independence on the same day, and each of them is an experiment in state-building and creating international and internal political policies in some fashion.

The following challenge highlights the uniqueness of the Ukrainian state experiment: how can the two cornerstones of Ukrainian statehood — Galician Ukraine and the eastern Russian population – be reconciled? The latest Maidan was won because individuals from the western regions had a stick in their hands and began to wield it in their discourse with those representing the east. The trajectory of the Ukrainian experiment demonstrates a progressive reduction in the existence and importance of Russian identity.

When campaigning in the eastern part of the country, Ukrainian President Volodymyr Zelensky pledged that he’d never forbid Russian from being taught in schools, and said he would ensure the standing of Russian as a language when communicating with government agencies, and that he would safeguard the memory of the Great Patriotic War. It was evident as soon as he took control that his aims were to do the complete opposite.

Currently, everything is being depicted in the Western media as though massive, powerful Russia had attacked weak Ukraine. However, from the standpoint of tactical power balance, the picture is less clear. In terms of physical size, Ukraine is Europe’s second-largest country after Russia. Ukraine has a population of almost 40 million people, which is substantial by European standards.

After Russia and Turkey, Ukraine has the third-largest military in Europe, with between 220,000 and 240,000 soldiers. Military expenditure as a percentage of GDP reached about 6% (on par with Israel), the armed services were upgraded, and Kiev bought advanced military equipment from the West. Western instructors had educated tens of thousands of Ukrainian soldiers, according to NATO Secretary General Jens Stoltenberg. The West hoped to establish a counterbalance to Russia by arming Ukraine and confronting it in a way that would entirely consume its attention and resources, similar to Pakistan’s confrontation with India.

A few weeks earlier, Russian pranksters phoned the UK secretary of defense on behalf of Ukraine’s Prime Minister, asking how Britain would respond if the country planned to build nuclear weapons. The defense minister said that the United Kingdom would always stand with its Ukrainian allies.

Many believe that the West would never permit Ukraine to gain nuclear weapons, yet it is plausible that the West would respond in the same way as Israel did: Formally, Israel lacks nuclear weapons, but as one Israeli leader put it, “If necessary, then we will use it.” In a metaphorical sense, the Americans could put a bulletproof vest on the Ukrainians, give them a helmet, and push them into Russia, saying, “Success, buddy.” All of this culminated in a one-sided dependency relationship. Ukraine is heavily reliant on the West, but the latter does not want to continue to do so indefinitely.

What would the Americans do if Russia retaliated with a similar threat? “Russia is expanding its presence in the region directly competing with the US for influence in our hemisphere,” US Admiral Kurt W. Tidd said during one of the Senate sessions. Consider what would happen if Russia approached Mexico in the same way the West approaches Ukraine: Mexico, to the surprise of the Americans, starts to aggressively militarize themselves, considering its very own missile program and nuclear weapons. Mexicans recall grievances from the nineteenth century, when Texas was still not a part of the US. Given the new leaks revealing former President Donald Trump’s willingness to invade Venezuela “because of a threat to regional security,” what would the US do?

We are most likely at the outset of a crisis that will take time to resolve. Russia’s original diplomatic proposal at the start of the conflict was for Ukraine to stay neutral, Crimea to be recognized as Russian territory, and the Donbass republics to be recognized as independent. Ukraine responded with its own demands: complete repatriation of its pre-2014 territories and no advances toward Russia. The escalation of Ukrainian demands indicates that a point of balance in the continuing military assault has yet to be established. It does, however, have its own development choices.

From the first scenario, the present Ukrainian government and Russia reach an agreement that takes Russian demands into account, and the West recognizes these agreements as part of a European security package deal. The Russian-Ukrainian conflict would lead to a military-political confrontation between Russia and the West, similar to the Cold War.

The second scenario envisions events unfolding in response to the military situation on the ground. As a result, either a compromise is reached or one of the parties wins. In this case, there is a chance that the West will reject the deal’s outcomes, resulting in the formation of a new Ukrainian administration that will be rejected by the government in exile. A system of support for the Ukrainian underground will be established from the West, comparable to that which prevailed in the west of Ukraine in the 1950s.

A rapid escalation of tensions between Russia and the West is the third option. It is likely that the crisis will extend to NATO countries, or that the sanctions campaign against Russia will escalate in the hopes of upsetting Russia’s statehood foundations. In this circumstance, the chances of a nuclear war grow. However, so far, Western politicians have distanced themselves from such intentions, stating that NATO forces will not be sent to this battle. Nonetheless, we have seen the West regularly breach its own “red lines” And it might happen again.GreatGameIndia is being actively targeted by powerful forces who do not wish us to survive. Your contribution, however small help us keep afloat. We accept voluntary payment for the content available for free on this website via UPI, PayPal and Bitcoin.