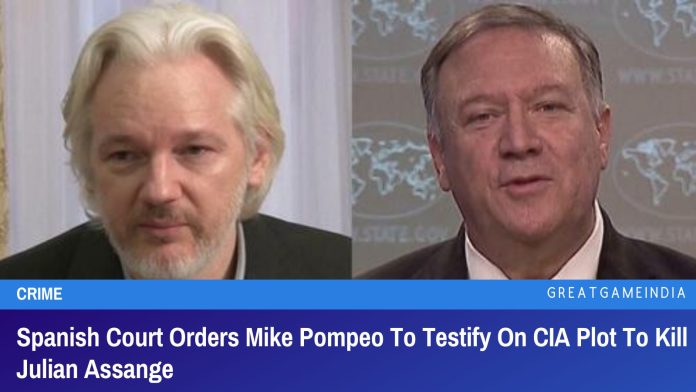 Pompeo was the director of the CIA at the time when a major revelation was made. Following Washington’s indignation that WikiLeaks made public a bundle of documents disclosing the agency’s ultra-secretive hacking techniques known as Vault 7, a Yahoo News investigative article last year revealed that the CIA allegedly intended to abduct or perhaps kill Assange.

According to a Yahoo report at the time, Pompeo and other top intelligence officials “were completely detached from reality because they were so embarrassed about Vault 7 … they were seeing blood.” according to a former Trump national security official.

According to ABC Spain, the summons follows Assange’s legal team’s submissions in relation to his continuing procedures with the UK government:

According to legal sources consulted by ABC, Pompeo has been summoned this June, although he may appear by videoconference. The same resolution agrees to call William Evanina, a former key US counterintelligence official who reportedly made statements supporting that theory. Pedraz has made this decision after the prosecutor Carlos Bautista reported in favor of the petition filed by the lawyer Aitor Martínez who, together with Baltasar Garzón, defends Assange.

The Spanish report goes on to add, “Separately, Spain’s National Court has been probing a Spanish security firm that may have spied on Assange for the CIA while providing security for the Ecuadorean Embassy in London.”

“National High Court Judge Santiago Pedraz agreed to summon Pompeo and former U.S. counterintelligence official William Evanina as witnesses to explain whether a plot was drawn up,” it adds.

Pompeo has yet to comment on the verdict or whether he intends to appear in court, which is unlikely given that current and past top US intelligence officials do not submit to legal examinations on secret intelligence topics.https://platform.twitter.com/embed/Tweet.html?creatorScreenName=greatgameindia&dnt=true&embedId=twitter-widget-0&features=eyJ0ZndfZXhwZXJpbWVudHNfY29va2llX2V4cGlyYXRpb24iOnsiYnVja2V0IjoxMjA5NjAwLCJ2ZXJzaW9uIjpudWxsfSwidGZ3X3JlZnNyY19zZXNzaW9uIjp7ImJ1Y2tldCI6Im9mZiIsInZlcnNpb24iOm51bGx9LCJ0Zndfc2Vuc2l0aXZlX21lZGlhX2ludGVyc3RpdGlhbF8xMzk2MyI6eyJidWNrZXQiOiJpbnRlcnN0aXRpYWwiLCJ2ZXJzaW9uIjpudWxsfSwidGZ3X3R3ZWV0X3Jlc3VsdF9taWdyYXRpb25fMTM5NzkiOnsiYnVja2V0IjoidHdlZXRfcmVzdWx0IiwidmVyc2lvbiI6bnVsbH19&frame=false&hideCard=false&hideThread=false&id=1448230785077714951&lang=en&origin=https%3A%2F%2Fgreatgameindia.com%2Fcia-plot-assassinate-assange%2F&sessionId=3648d93a7fd9342a3cea4f610bad505768f5972f&siteScreenName=greatgameindia&theme=light&widgetsVersion=b45a03c79d4c1%3A1654150928467&width=550px

Although Assange was formerly imprisoned at the Ecuadorean embassy in London, his supporters and legal team claim that the CIA and perhaps other Western intelligence agencies collaborated with a private security firm to bug the embassy and conduct 24/7 perimeter surveillance. This included going to great lengths to gather DNA samples, including from his and Stela Morris’ newborn son’s dirty diaper.GreatGameIndia is being actively targeted by powerful forces who do not wish us to survive. Your contribution, however small help us keep afloat. We accept voluntary payment for the content available for free on this website via UPI, PayPal and Bitcoin.