SOMEBODY Must Really Want A War In Ukraine, And We Should Remember That Both Previous World Wars Were Sparked In Eastern Europe 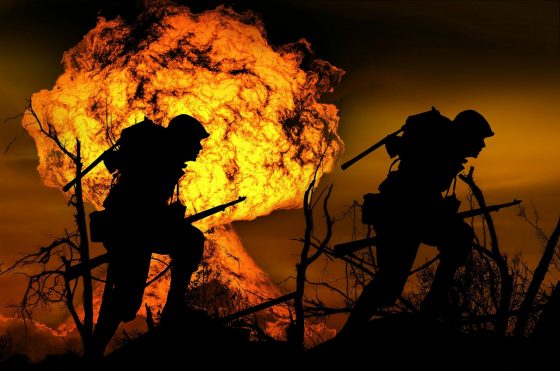 Well, that sure escalated quickly.  Early on Wednesday, it was being reported that Russia was moving forces away from the Ukrainian border and that both sides would try to give diplomatic talks another chance.  But somebody out there must not have been too pleased with that, because by Wednesday evening everything had changed.  The Ukrainian military and the separatists in eastern Ukraine started shelling one another relentlessly, and according to the latest information that I have been able to find it is still going on as I write this article.  In previous articles, I have expressed my opinion that war in Ukraine will not begin this month, but it appears that somebody out there is trying to get it going as soon as possible.

I think that this is a good time to remember that both previous world wars were sparked in eastern Europe.

The assassination of Austrian archduke Franz Ferdinand in Sarajevo on June 28, 1914 is generally recognized as the event that initiated World War I.

And the invasion of Poland in 1939 is generally recognized as the event that initiated World War II.

So will a conflict in Ukraine by the event that initiates World War III?

As far as I can determine, the widespread shelling in Ukraine began some time on Wednesday evening.

On Thursday, photos of a kindergarten class that had been hit by a shell were being widely circulated by western media…

A “Kindergarten” junior school in Stanytsia Luhanska, Ukraine, was struck by shellfire that impacted several villages and towns near the Donbas region in Eastern Ukraine on Thursday morning. According to the Ukranian government, as of Thursday afternoon, there had been “42 cases of shelling” recorded which had not caused any deaths, but had seen buildings damaged and seen several people injured, including at least four civilians and one soldier.

The Russian government provided their own take on events, saying in a release from state media service TASS that the shelling was not by Russian forces but from “forces of the self-proclaimed Donetsk People’s Republic” — in other words forces loyal to and equipped by Moscow — and was initiated in response to Ukraine shelling them first.

I wish that I could prove to you which side started shooting first.

But what we do know is that both sides are now firing at one another.

Could all of this shelling be a prelude to something bigger?

During a discussion with reporters on Thursday, Joe Biden made some rather startling claims…

President Biden on Thursday said the U.S. has reason to believe that Russia is “engaged in a false flag operation,” and said he believes that an invasion into Ukraine “will happen in the next several days.”

After all of the false flag operations that the U.S. has been involved in over the years, it is quite ironic that the U.S. is now publicly accusing the Russians of doing the same thing.

And we shall see if Biden is correct about “the next several days”.

I don’t think that he will be.

But I do think that the possibility of a major conflict in the region happening this year has just gone way up.

U.S. Defense Secretary Lloyd Austin says that the Russians now have more than 150,000 troops in the region…

‘We see them add to the more than 150,000 troops they already have,’ Defense Sec. Lloyd Austin. ‘Even in the last couple days.’

‘We see some of those troops edge closer to that border. We see them fly in more combat and support air craft. We see them sharpen their readiness in the Black Sea. We even see them stocking up their blood supplies,’ Austin said.

‘You don’t do these things for no reason. You certainly don’t do them if you’re getting ready to pack up and go home,’ the secretary said.

U.S. officials certainly seem to be acting as if they believe that we are on the brink of war.

During a meeting of the UN Security Council on Thursday, U.S. Secretary of State Antony Blinken raised tensions by warning that the Russians may be plotting a “false flag” chemical weapons attack…

Russia accused Secretary of State Antony Blinken Thursday of raising tensions in Eastern European after he issued a warning that Moscow’s plans for a ‘false flag operation’ may include a chemical weapons attack to manufacture a pretext for invading Ukraine.

Blinken used a meeting of the United Nations Security Council to set out the fullest account yet of what Washington knows about Russia’s plans.

Needless to say, the Russians were not pleased by such a wild accusation…

‘I would even go so far as to say that they are dangerous because they bring in more tension into the unready tense atmosphere,’ he said, before repeating Moscow’s discredited claims that some troops were already heading home after completing drills.

Of course the Russians are taking actions that are raising tensions too.

For example, the second most important U.S. diplomat in Russia was expelled from the country on Thursday…

Russia has expelled the second-most senior American diplomat at the U.S. Embassy in Moscow as tensions between the two countries continue to rise over a possible Russian invasion of Ukraine, the State Department said Thursday.

In the coming days, the U.S. and Russia will trade lots of accusations of blame.

I just wish that we could find a way to stop the process that has now begun.

As I have stated previously, if Americans truly understood what was at stake the streets of our major cities would be filled with protesters.

Because once World War III begins, nothing will ever be the same again.

The time to stop it is now, and the window of opportunity is very narrow.

Unfortunately, somebody out there really seems to want this war to happen, and I have a feeling that whoever it is will eventually get their wish.

***It is finally here! Michael’s new book entitled “7 Year Apocalypse” is now available in paperback and for the Kindle on Amazon.***

About the Author: My name is Michael Snyder and my brand new book entitled “7 Year Apocalypse” is now available on Amazon.com.  In addition to my new book I have written five other books that are available on Amazon.com including  “Lost Prophecies Of The Future Of America”, “The Beginning Of The End”, “Get Prepared Now”, and “Living A Life That Really Matters”. (#CommissionsEarned)  When you purchase any of these books you help to support the work that I am doing, and one way that you can really help is by sending digital copies as gifts through Amazon to family and friends.  Time is short, and I need help getting these warnings into the hands of as many people as possible.  I have published thousands of articles on The Economic Collapse Blog, End Of The American Dream and The Most Important News, and the articles that I publish on those sites are republished on dozens of other prominent websites all over the globe.  I always freely and happily allow others to republish my articles on their own websites, but I also ask that they include this “About the Author” section with each article.  The material contained in this article is for general information purposes only, and readers should consult licensed professionals before making any legal, business, financial or health decisions.  I encourage you to follow me on social media on Facebook and Twitter, and any way that you can share these articles with others is a great help.  These are such troubled times, and people need hope.  John 3:16 tells us about the hope that God has given us through Jesus Christ: “For God so loved the world, that he gave his only begotten Son, that whosoever believeth in him should not perish, but have everlasting life.”  If you have not already done so, I strongly urge you to ask Jesus to be your Lord and Savior today.