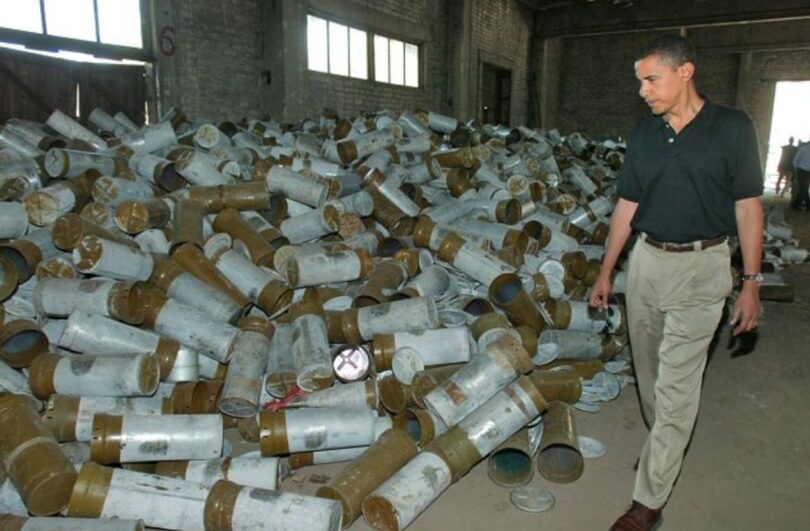 One of the now-deleted reports shows that a laboratory was opened in Odessa, Ukraine under the Nunn-Lugar framework. The facility’s planning started in 2005 in coordination with then-senators Dick Lugar and Barack Obama.

“U.S. Sen. Dick Lugar applauded the opening of the Interim Central Reference Laboratory in Odessa, Ukraine, this week, announcing that it will be instrumental in researching dangerous pathogens used by bioterrorists,” BioPrep watch reported in the now-deleted post.

“The level-3 bio-safety lab, which is the first built under the expanded authority of the Nunn-Lugar Cooperative Threat Reduction program, will be used to study anthrax, tularemia and Q fever as well as other dangerous pathogens,” the report added.

“The continuing cooperation of Nunn-Lugar partners has improved safety for all people against weapons of mass destruction and potential terrorist use, in addition to advancements in the prevention of pandemics and public health consequences,” Lugar said.

“Lugar said plans for the facility began in 2005 when he and then Senator Barack Obama entered a partnership with Ukrainian officials,” the report noted. “Lugar and Obama also helped coordinate efforts between the U.S and Ukrainian researchers that year in an effort to study and help prevent avian flu.”

“The Nunn-Lugar Act, which established the Cooperative Threat Reduction Program, was established in 1991,” the report added. “Since that time it has provided funding and assistance to help the former Soviet Union dismantle and safeguard large stockpiles of nuclear, chemical and biological weapons.”

The National Pulse cites “a 2011 report from the U.S. National Academy of Sciences’ Committee on Anticipating Biosecurity Challenges of the Global Expansion of High-Containment Biological Laboratories explained how the Odessa-based laboratory “is responsible for the identification of especially dangerous biological pathogens.”

The Ukraine trip made by then-senators Obama and Lugar were part of a senate oversight delegation to ensure the weapons sites were secured.

“The two met in Kiev with President Victor Yushchenko, making the case that an existing Cooperative Threat Reduction Program covering the destruction of nuclear weapons should be expanded to include artillery, small arms, anti-aircraft weapons, and conventional ammunition of all kinds,” the report added.

The two senators secured U.S. funding to help destroy the weapons instead of leaving them intact.

“After a stopover in London, the senators returned to Washington and declared that the U.S. should devote funds to speed up the destruction of more than 400,000 small arms, 1,000 anti-aircraft missiles, and more than 15,000 tons of ammunition,” the Daily Mail reported.

Obama said the existing Cooperative Threat Reduction Program “has effectively disposed of thousands of weapons of mass destruction, but we must do far more to keep deadly conventional weapons like anti-aircraft missiles out of the hands of terrorists.”

Foreign Policy published an opinion piece in 2020 that described the present-day operation of the ex-Soviet bioweapons labs.

“A network of Soviet-era laboratories once used to track plague outbreaks and develop bioweapons during the Cold War is at the front line of the fight against the coronavirus pandemic in Central Asia and the Caucasus,” the FP piece states. “That hasn’t stopped Russia from instigating a propaganda and disinformation campaign against these labs, which were modernized and converted to civilian purposes long ago. That’s because these disease-control labs, located in former fiefs of the Soviet empire, are a legacy of one of the most successful and benevolent foreign-policy programs the United States has ever undertaken.”Advertisements

The article provides some valuable background on the Nunn-Lugar framework to secure these former bioweapons research sites.

“Most of the labs were part of the Soviet anti-plague system, created in the mid-20th century as a network of research institutes and field stations across the Soviet Union to study and prevent the spread of pathogens,” the article notes. “Some of these facilities were pulled into the Soviet bioweapons program in the 1960s and 1970s. When the Soviet Union collapsed, all were left unsecured, underfunded, and in poor states of repair. It was feared they would no longer be able to monitor and control disease outbreaks—and that someone might get their hands on a stock of killer pathogens.”

In 2014, nonetheless, the Obama administration denied Ukraine access to “radar jamming and detection equipment necessary to evade and counter [Russian] anti-aircraft systems” — like the system Putin’s cronies had used to shoot down Flight 17.

“The downing of Flight 17 is of a piece with Putin’s lawless aggression,” Andrew McCarthy wrote at National Review. “Having already absorbed Crimea, he seeks to further dismember a European country… So far, he hasn’t paid enough of a concrete price, despite repeated warnings from President Obama.”

Contrary to widespread misperception spread by the mainstream media, Obama and Biden did not arm Ukraine. Trump did.

“But Obama would not arm the Ukrainians,” McCarthy notes. “It was not until Donald Trump became president that they were provided with serious defensive weaponry, though it would obviously never be enough if Putin decided to mass Russia’s far superior forces and invade — which he waited to do until Obama’s vice-president, Joe Biden, was in the Oval Office.”

But Obama’s disarming of Ukraine extended back to before he was even president. As a Senator, he had actually taken a special interest in making sure that the country would be relatively defenseless against potential Russian incursion.

“As a U.S. senator, Barack Obama won $48 million in federal funding to help Ukraine destroy thousands of tons of guns and ammunition – weapons which are now unavailable to the Ukrainian army as it faces down Russian President Vladimir Putin,” the Daily Mail noted.

Victoria Nuland, the Under Secretary of State for Political Affairs, nonetheless fueled public suspicions about the program by stating her fears the biolabs would fall into the Russians’ hands. Watch:

US is working with Ukraine to prevent biological research facilities from falling into the hands of Russians — Nuland pic.twitter.com/onrqFclF9W

“Ukraine has biological research facilities, which in fact, we are now quite concerned,” Nuland said “Russian troops, Russian forces may be seeking to gain control of, so we are working with the Ukrainians on how they can prevent any of those research materials from falling into the hands of Russian forces.”

Ukraine had already issued a presidential order on February 24 to sterilize the facilities in the event of unforeseen military occupation, as documents obtained and exclusively translated by Becker News revealed.

Documents scrubbed from the U.S. embassy in Ukraine and obtained by Becker News confirm the existence and Pentagon funding of the “Biological Threat Reduction” program.

The Russians’ insistence that it has evidence of such a bioweapons program has become a major hurdle at the diplomatic negotiations between Russia and Ukraine in Belarus.

Russian foreign minister Sergei Lavrov charged at a press conference last week that “the Pentagon built two biowarfare labs and they have been developing pathogens there in Kyiv and in Odessa.” Lavrov also compared the presence of the laboratories to the United States’ Weapons of Mass Destruction program allegations that led it to invade Iraq in 2003 and topple dictator Saddam Hussein.

Leonid Slutsky, head of the Duma Committee on International Affairs and a member of the Russian delegation at the talks with Ukraine, argued that the purported development of biological weapons components “confirm that the Russian Federation had good reasons for conducting a special military operation to demilitarize Ukraine.”

Aufgrund technischer Erneuerungen konnte die Coldwellian Times Redaktion in den letzten Tagen keine News posten. Ab heute sind wir nun wieder für Euch da. Bitte verbreitet diese Nachrichtenseite. Herzlichen Dank – das Team der Coldwellian Times Redaktion. / Due to technical innovations we have not been able to publish any news in the last days. From today we are back for you. Please tell your friends about this news page. Thank you very much.

Aufgrund technischer Erneuerungen konnte die Coldwellian Times Redaktion in den letzten Tagen keine News posten. Ab heute sind wir nun wieder für Euch da. Bitte verbreitet diese Nachrichtenseite. Herzlichen Dank – das Team der Coldwellian Times Redaktion. / Due to technical innovations we have not been able to publish any news in the last days. From today we are back for you. Please tell your friends about this news page. Thank you very much.