Documentary From 2018 Exposed The US Biolabs In Ukraine! 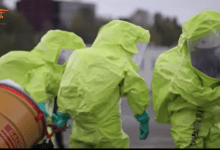 A bombshell 2018 documentary by Al Mayadeen exposes the secret US-funded Biolabs that use dangerous pathogens in Easter Europe and Ukraine.

The MSM and the US government claim that these are Russian disinformation; the documentary confirmed the Russian accusations of Pentagon-supported bio lab facilities on its borders.

The US Embassy to Tbilisi [Georgia] is involved in the trafficking of frozen human blood and pathogens as diplomatic cargo for a secret military program.

Internal documents, leaked to Bulgarian journalist Dilyana Gaytandzhieva by Georgian insiders, implicate US scientists in the transportation of and experimenting on pathogens under diplomatic cover.

According to these documents, Pentagon scientists have been deployed to the Republic of Georgia and have been given diplomatic immunity to research deadly diseases and biting insects at the Lugar Center – the Pentagon biolaboratory in Georgia’s capital Tbilisi.

The US government confirmed that viruses like SARS-CoV-2 have been among the pathogens studied at some Biolabs in Georgia since 2017. Despite the US State Department undersecretary Victoria Nuland confirming the existence of the Ukraine Biolabs, the Pentagon and the Biden admin still claims that the US isn’t linked with the biological labs in Ukraine.

The evidence shows that the US-funded these clandestine biological research facilities that Russia convened an emergency UN Security Council meeting last week, where many counties shared their concern about the US involvement in these labs.