Swiss Military Give Schwab 5,000 Troops and ‘No-Fly Zone’ for This Year’s Davos Summit 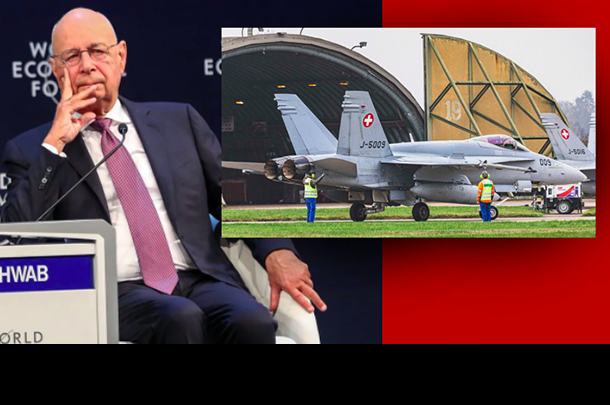 The Swiss government has laid on its biggest military deployment in peace time – not for any war or overseas intervention, but rather to protect the global elite who are gathering in Davos for Klaus Schwab’s annual World Economic Forum confab.

Aside from soldiers erecting security fences, the Swiss government will be deploying some 5,000 military personnel, as well as thousands of local and regional police.

The Swiss Air Force jets will be constantly circling above the event to enforce a ‘no-fly zone’ during the elite globalist summit.

DAVOS, Switzerland, May 16 (Reuters) – Movers and shakers arriving for the annual meeting of the World Economic Forum (WEF) this month can pack sandals instead of ski boots for a rare springtime version of the event in Davos, the Swiss ski resort that is Europe’s highest city.

In December, organisers postponed the meeting of government, business and other leaders just before its traditional January slot, citing the difficulties of holding an in-person conference during the coronavirus pandemic. read more

Simply putting on the event after a two-year hiatus is welcome news to locals, who, a 2017 study showed, benefit from a $60 million windfall every time it takes place.

“All the people here are very glad that the World Economic Forum is coming back now. It is another step back to normality,” said Samuel Rosenast, spokesperson for the local tourism board.
The pandemic slammed hotels and restaurants in Davos, whose fresh air and sunlight drew sanatoriums featured in German novelist Thomas Mann’s work “The Magic Mountain”.

“The whole congress business was dead,” Rosenast said, noting that Davos’s conference centre had closed for more than a year.

Construction crews have been finishing pop-up networking facilities for the business and political elite that descend for the May 22-26 conference. Soldiers are erecting security fences.

The Swiss government will deploy as many as 5,000 military personnel to support local police. Air force jets will again circle above to enforce a no-fly zone.

Geneva-based WEF says the meeting will bring together more than 2,000 leaders and experts from around the world, somewhat smaller than some past meetings. No government or corporate bigwigs from Russia were invited, because of the Ukraine war.

Topics on the agenda include the pandemic recovery, tackling climate change, the future for work, accelerating stakeholder capitalism, and harnessing new technologies…

Continue this report at Reuters