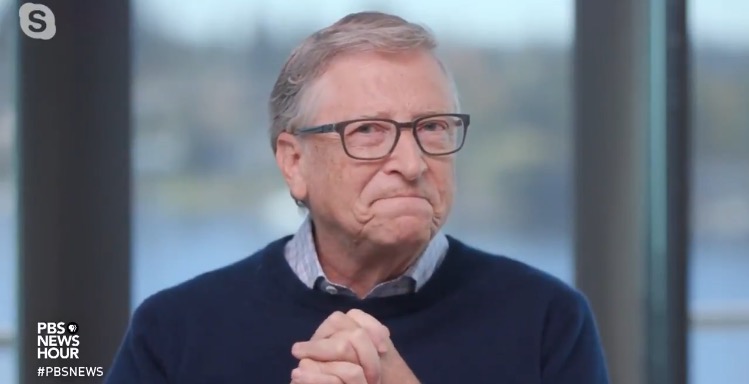 The Globalist Cabal of elites wants you… to eat fake meat. And they are setting the table for dinner as we speak.

In a recent interview discussing his recent book – “How to Avoid a Climate Disaster“ – billionaire Microsoft founder Bill Gates, who is currently the world’s fourth wealthiest individual, advocated for “rich countries” to fully switch to, what he calls, a “100% synthetic beef” diet that would consist entirely of lab-grown protein.

The move, Gates explained, would supposedly aid in the fight against “climate change” by curbing greenhouse gasses that are produced when raising livestock…

…Which is perfectly in line with the ol’ AOC argument of farting cows destroying the environment.

TRENDING: “Bill Barr Broke the Law… The Fix Is In… Bill Barr Did Not Do His Job” – EXCLUSIVE VIDEO: Tony Shaffer on Barr’s Actions After the 2020 Election

This elitest insanity of trying to reconfigure the entire human diet – that has been in place since humans discovered fire – with fake lab-grown substitutes is an ambitious and unprecedented one, to say the least. One of the main hold-ups of mass adoption has been getting the taste and texture of the fake substitutes close enough to the real thing where the difference is not noticeable, but this endeavor has failed miserably, leading to a massive drop-off in public acceptance after a brief upswing last year.

Gates also addressed this issue during the interview, laughably claiming that it’s possible to get used to the weird unnatural taste of synthetic beef, and, if you don’t, the scientists will make it taste better in the future.

From Gates’ interview with Technology Review, via The Hill:

“I do think all rich countries should move to 100% synthetic beef,” Gates said when asked about how countries can help to reduce methane emissions when it comes to food production. “You can get used to the taste difference, and the claim is they’re going to make it taste even better over time.

The philanthropist and Microsoft co-founder told the outlet he is hopeful that a turn to plant-based proteins will help combat methane emissions produced by livestock.”

“Impossible and Beyond have a road map, a quality road map and a cost road map, that makes them totally competitive,” Gates said, referring to popular plant-based meat companies. “As for scale today, they don’t represent 1% of the meat in the world, but they’re on their way.”

Gates told Technology Review that he acknowledges the alternative argument that getting rid of cows is viewed as an unpopular approach, but he said that the benefits of plant protein are worth a shift for some countries.

“Eventually, that green premium is modest enough that you can sort of change the [behavior of] people or use regulation to totally shift the demand,” Gates said. “So for meat in the middle-income-and-above countries, I do think it’s possible.”

Instead of eating meat, some of the world’s richest megalomaniacs are laying the groundwork for the masses, who they view as the serfs serving their whims, to consume a diet strictly made up of nutrient-depleted vegan lab-grown foods. When they mention “the new normal,” they are conditioning people to accept their future where they will “own nothing and be happy,” live in their pods, and live their new lives as insect-eaters, while the elites enjoy the spoils that are deemed too dangerous to the environment.https://platform.twitter.com/embed/Tweet.html?dnt=true&embedId=twitter-widget-0&features=eyJ0ZndfZXhwZXJpbWVudHNfY29va2llX2V4cGlyYXRpb24iOnsiYnVja2V0IjoxMjA5NjAwLCJ2ZXJzaW9uIjpudWxsfSwidGZ3X3NrZWxldG9uX2xvYWRpbmdfMTMzOTgiOnsiYnVja2V0IjoiY3RhIiwidmVyc2lvbiI6bnVsbH0sInRmd19zcGFjZV9jYXJkIjp7ImJ1Y2tldCI6Im9mZiIsInZlcnNpb24iOm51bGx9fQ%3D%3D&frame=false&hideCard=false&hideThread=false&id=1507761650597777409&lang=en&origin=https%3A%2F%2Fwww.thegatewaypundit.com%2F2022%2F03%2Fbill-gates-says-rich-nations-move-100-synthetic-beef-order-fight-climate-change-can-get-used-taste-difference%2F&sessionId=0ef491b381f2c2ffd1edd77665a3ba7b8c07f526&theme=light&widgetsVersion=f9f80a909a60b%3A1648751432723&width=500px

The only question is, will we stand like our forefathers and take back our freedom from the Globalist cabal before the crickets hit the table.

Time to go eat a steak.